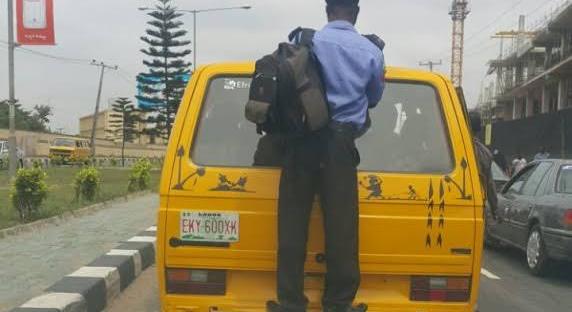 Well, it seemed like it would be a nice day when I left in the morning. I got a bus early, and there was just little traffic (yes I enter traffic daily). But the devil decided to use our driver. We got to a part of our route where there was no traffic but this man decided not to follow there. Rather, he had the bright idea to pass one way. The passengers complained but he didn’t listen.

Then, without warning, the policeman entered the bus and started driving us in a direction opposite our destination. We started asking him where he was taking us and he refused to answer. They kept shouting and asking him and this man kept on driving. Me I just dey observe. I was already tired of everything.

There was another policeman in the bus who was a passenger and he was quiet throughout this chaos. They kept on asking the man where he was taking us. People even started insulting him. Someone even said “oga you go collect 20 naira?” 🤣🤣The next thing the man said was that we should have stopped the driver from following the route he did. Just imagine. Well, when the passengers made it clear that they were not going to take the bullshit and some even started threatening him, he parked for us to alight. When we came down, the insults quadrupled. Some even threatened to beat him up if he got down 🤣🤣🤣. He quickly drove off.

When he’d driven off, the passengers then faced the other passenger policeman. I think they just transferred the aggression and anger to the other guy. They actually kept insulting him till we found another bus to enter. Even when we did, they continued until he got to his destination. They said that for someone who wasn’t paying transport fare, the least he could’ve done was to talk to his fellow policeman.

Coming back was worse but that’s another story. I’m still recovering from the traffic. Drop your comments😁

Drinker with a writing problem. View all posts by Nwanz

4 thoughts on “POLICE IS YOUR FRIEND”